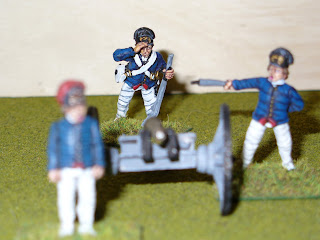 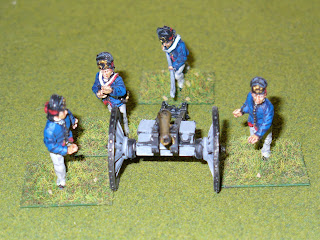 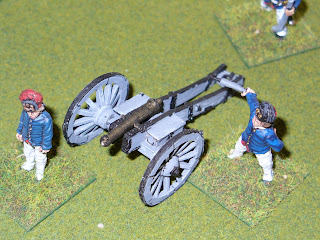 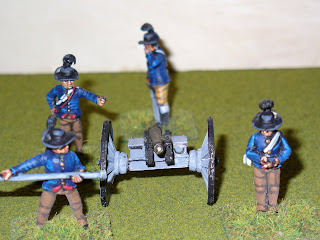 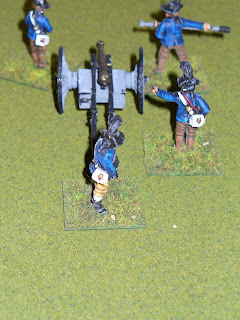 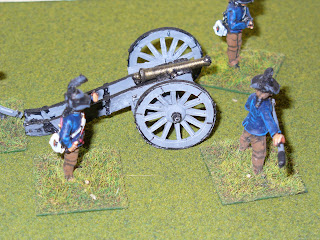 My long awaited post today is of the British Royal Artillery. I have painted up 4 sets of Perry 28mm British AWI Royal Artillery. Tow sets are with crews in Southern dress, short blue jackets with floppy slouch hats. The other 2 sets are of RA crews wearing the leather cap/hats that were adopted by them when they came to fight in North America.

I picked up the two Southern dress sets because I need artillery for my British Southern Army. One set is loading,one set is in firing poses. These are all I will need as the Southern Army didn't have much artillery until the reached Yorktown.

The other two sets I got in a good deal on Ebay. I couldn't pass them up of course! They are also in two poses,firing,and moving the piece into position. Once again,the Perry's did a spectacular job with these fine figures! A joy to paint! As with others I know,I kind of struggled with the gun carriages looking for the "right" shade of gray,or blue/gray. I looked at others on the web,and in books,and settled for Vallejo neutral gray, with a light gray drybrushing. Overall,I'm satisfied with the results.

Very nice, but only one pic?

I thought I uploaded 8 pics! But when I posted, it only showed the one and wouldn't let me post more!

TY Giles! It's Vallejo neutral gray,dry brushed with Vallejo light gray. Believe it or not,I wasn't happy with it at first site myself!